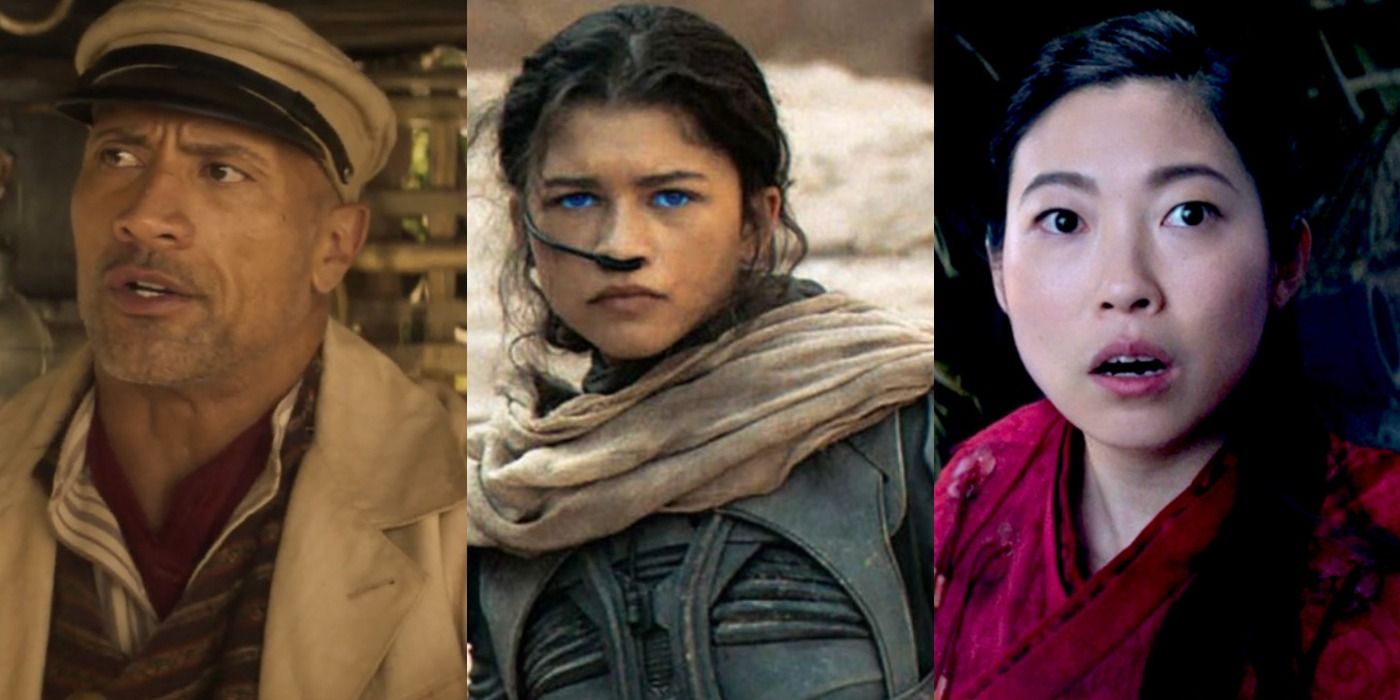 Before the age of social media and the influx of streaming platforms, box office returns used to be the only way the public measured a hit movie. Now, that’s only part of the equation. Social media buzz, word of mouth, and just how many households stream a movie can all contribute to how big it becomes.

2021 was an interesting year for movies because so many were box office and streaming hybrids as several theaters remained closed and pandemic restrictions were in place for public safety. As a result, the box office might not have been overwhelming for some of the movies that could be considered hits — but some actors still appeared in multiple successful 2021 movies.

It seems to be a given these days that if Dwayne Johnson’s name is attached to a movie, it’s going to be a hit. That was definitely true for 2021. Johnson was one of the stars of Disney’s Jungle Cruise, which saw a hybrid release and still managed to be the eleventh highest-grossing movie in the U.S.

Johnson also loaned his voice to the tenth highest-grossing movie — Free Guy — for a role as one of the video game characters. In the streaming world, Johnson starred in a popular Netflix movie. Red Notice spent two months as one of the most-streamed movies around the world.

Like Johnson, Ryan Reynolds starred in both a box office dominating movie and a streaming release in 2021. He was the titular Free Guy, which made over $121 million at the US box office.

Likewise, he was part of the trio that brought Red Notice to Netflix. (Gal Gadot was the third main player in the cast.) Reynolds played the thief that Johnson’s character was after and forced to team up with during the storyline. This allowed the two to develop a fun chemistry that has the audience anticipating a sequel.

Shang-Chi and the Legend of the Ten Rings was the second highest-grossing movie in the US in 2021, and the ninth worldwide. The movie didn’t just dominate the box office, though. It also was the most talked-about movie on social media until December. In it, Awkwafina played the best friend of the titular character who gets caught up in his father’s quest for power.

RELATED: Which Shang-Chi Character Are You Based On Your Zodiac Sign?

While Awkwafina had a handful of other projects released during the year, her other hit was Raya and the Last Dragon. Children’s movies don’t always land high in the box office results, as many parents would rather wait for home releases, but the movie had a respectable haul.

Like Johnson, Emily Blunt starred in Jungle Cruise for Disney, but that wasn’t her only hit. The actress also appeared in A Quiet Place Part II, which actually performed even better at the box office.

The thriller would have released in 2020, but the shutdown of movie theaters all over the world prevented that. With it being pushed to 2021, A Quiet Place Part II gave Emily Blunt two hits for the year.

Stephanie Beatriz is best known for her role as Rosa in TV’s Brooklyn-Nine-Nine. 2021, however, allowed her to make a big splash on the big screen with two different movies — and both musicals at that.

She voiced Mirabel in Encanto, which certainly has the biggest musical moments of the year with “We Don’t Talk About Bruno” climbing up radio’s Hot 100 chart. (It’s also the most-viewed Encanto song on YouTube.) But Beatriz also appears as a supporting player in In the Heights, adapted for the screen from Lin-Manuel’s Broadway musical. The movie wasn’t quite as big at the box office as some predicted, but it definitely had people talking and listening to the music — and ended up being one of the highest-rated movies on Rotten Tomatoes for the year.

Scarlett Johansson might have sued Disney over profits for Black Widow when it was released on Disney Plus, but it still became the fourth highest-grossing movie in the U.S. in 2021 and twelfth around the world. Black Widow also dominated social media in 2021, as it was one of the top 10 movies discussed on social networking sites like Twitter.

RELATED: 20 Of Natasha Romanoff’s Most Memorable Quotes In The MCU

Johansson’s other hit of the year wasn’t another action flick, but a children’s movie. She loaned her voice to the animated sequel Sing 2, which actually came in right behind Black Widow for worldwide box office.

Like many of the actors who saw multiple hits in 2021, Gemma Chan appeared in a superhero movie. She played Sersi in Marvel’s Eternals, which made over $400 million at the box office around the world. Like Black Widow, it also was one of the most talked-about movies on social media.

Chan’s other big movie of 2021? An animated picture. She loaned her vocal talents to Raya and the Last Dragon as Namari, one of the antagonists.

It’s fitting that John Cena’s biggest project in the beginning of 2022 is Peacemaker, because the streaming series spins out of the events of one of his 2021 hits, The Suicide Squad. While the movie wasn’t huge at the box office (25th around the world), it increased the buzz for the DCEU and was lauded as much improved compared to its predecessor.

His other big hit of the year? F9, the latest installment in the Fast and Furious franchise. Each movie in the franchise only seems to increase its box office haul, as F9 made over $726 million around the world.

While most of the actors had two hit movies in 2021, Benedict Wong beats them out with three. Two of those movies, as has been common for 2021, are superhero movies. Wong appeared in small roles in both Shang-Chi, and in Spider-Man: No Way Home. The latter was the biggest grossing movie in 2021, and had some of the biggest social media buzz of the year. It’s also the highest rated movie on Rotten Tomatoes.

In addition to the two superhero juggernauts of 2021, Wong is also one of the numerous actors to have an animated movie release. His voice appears as one of the title character’s allies in Raya and the Last Dragon.

Though Wong appears in three hit movies for 2021, Zendaya has him beat as well. She appears in four. Of course, those were also all released while anticipation for season 2 of her hit HBO series Euphoria was building.

Zendaya appears in Spider-Man: No Way Home, which has become one of the biggest movies of all time. She also appears in Dune, which saw a hybrid release on HBO Max and in theaters, and still climbed to number 11 at the worldwide box office. Zendaya also appeared in the Netflix movie Malcolm & Marie, which was a more adult role for her, and one that was filmed entirely with the cast and crew in quarantine. She even leant her voice to another strong children’s movie as she played Lola Bunny in the Space Jam sequel, which made over $162 million around the world. 2021 was clearly Zendaya’s year.

NEXT: 10 Best Quotes From Spider-Man: No Way Home


Amanda is a freelance writer in Florida. She holds a Psychology degree and loves superheroes and serial storytelling. Her favorite heroines include Black Widow, Blake Belladonna, and Sailor Jupiter.

Elon Musk Was Booed When Dave Chappelle Brought Him Onstage

10 Movies Where The Beginning Is The Best Bit, According To...